Dozens of players are traded each season many of whom are expected to contribute immediately for playoff runs. How long does it take for a player to get integrated?

Over the next few weeks, it’s likely that several NBA players will be traded and asked to adjust, on the fly, to new teams, schemes, and teammates. How long does this transition take? Do professional athletes need a grace period at all? In other words, when can we start judging players’ individual game performances as indicative of their new selves?

There were 63 players from the 2015-16 through the 2018-19 NBA season who were traded in the middle of the year and played at least 23 games for their new team. These players make up our data set.

By including only those who played at least 23 games for their new team, we obtain a strong sample size as well as a consistent group of players. To include those who only played, say, five games with their new team might skew the data towards players who obtained a large number of DNPs. This analysis excludes players who were traded before the season began, as those traded in the offseason have more time to adapt to their new surroundings.

The data shows us that teams usually start players off a little slower than normal, giving them on average 2-3 less minutes per game than they will come to receive. Players’ minutes begin to steady around 11-12 games after the trade.

It’s worth investigating, then, if this minute progression is too quick, too slow, or just right. Player performance provides some insight in this regard.

Individual game performance is assessed here using Game Score,  a stat created by former Grizzlies V.P. of Basketball Operations John Hollinger to measure the individual contributions of a single player in a given game. While it is an imperfect statistic, Game Score can offer a useful snapshot of general trends in player performance. 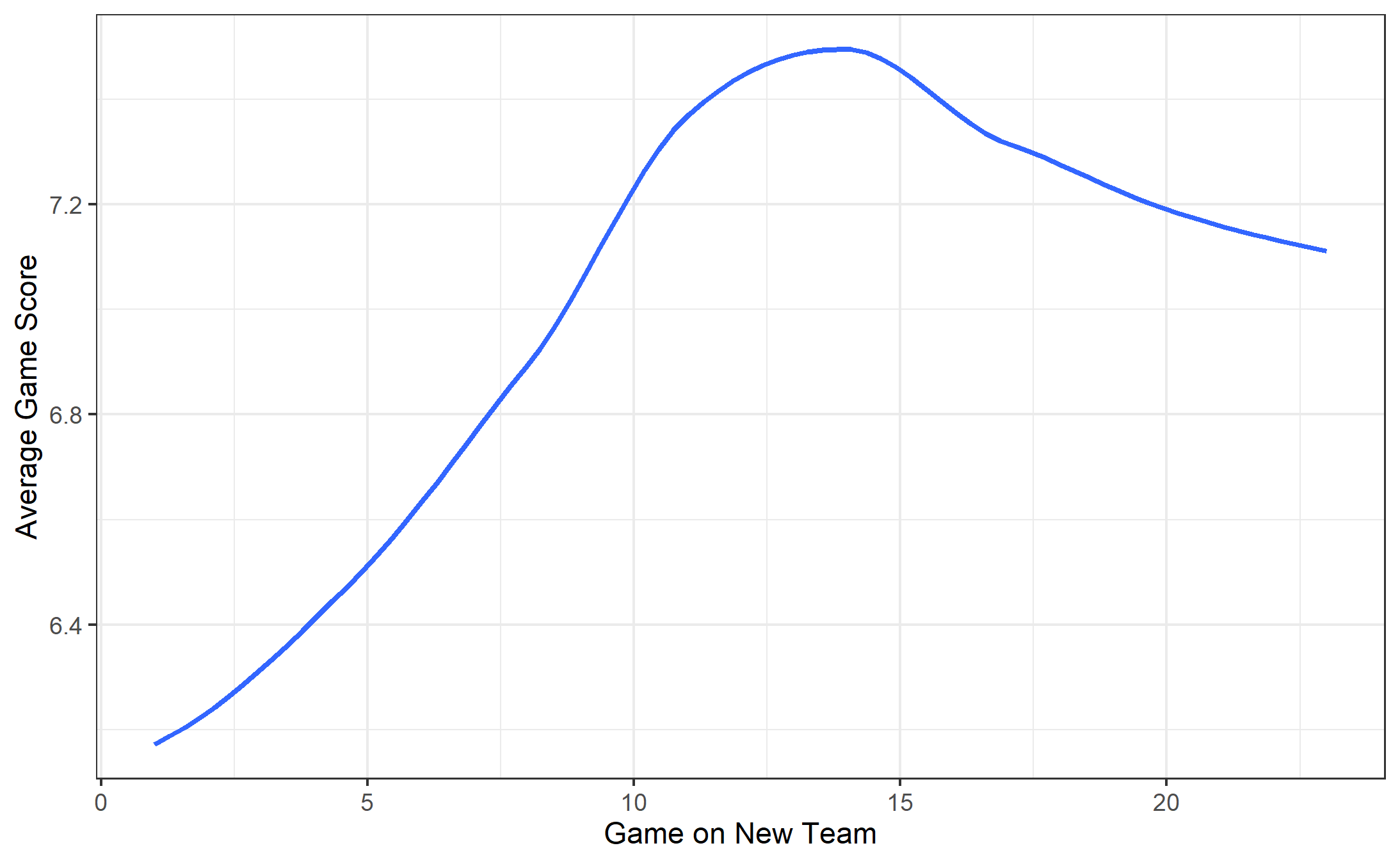 The above graph shows that newly traded players tend to start performing roughly as expected after 15-20 games on their new club; however, this performance does not differ greatly from their performance in the first few games. In traded players’ first game on their new team, the average Game Score is around 6.2, whereas their Game Score in their 20th game is roughly 7.2 on average.

The difference between a Game Score of 6.2 and 7.2 is the equivalent of adding merely one defensive rebound and one assist in a game. So yes, a difference exists. But the next time a player is traded and gets off to a slow start in their first 5, 10, or 15 games with a team, don’t expect vastly different results the rest of the season.

We also observe a slight dip in Game Score and a slight increase in minutes around game 17. Here’s what players’ Game Scores look like on a per-minute basis. 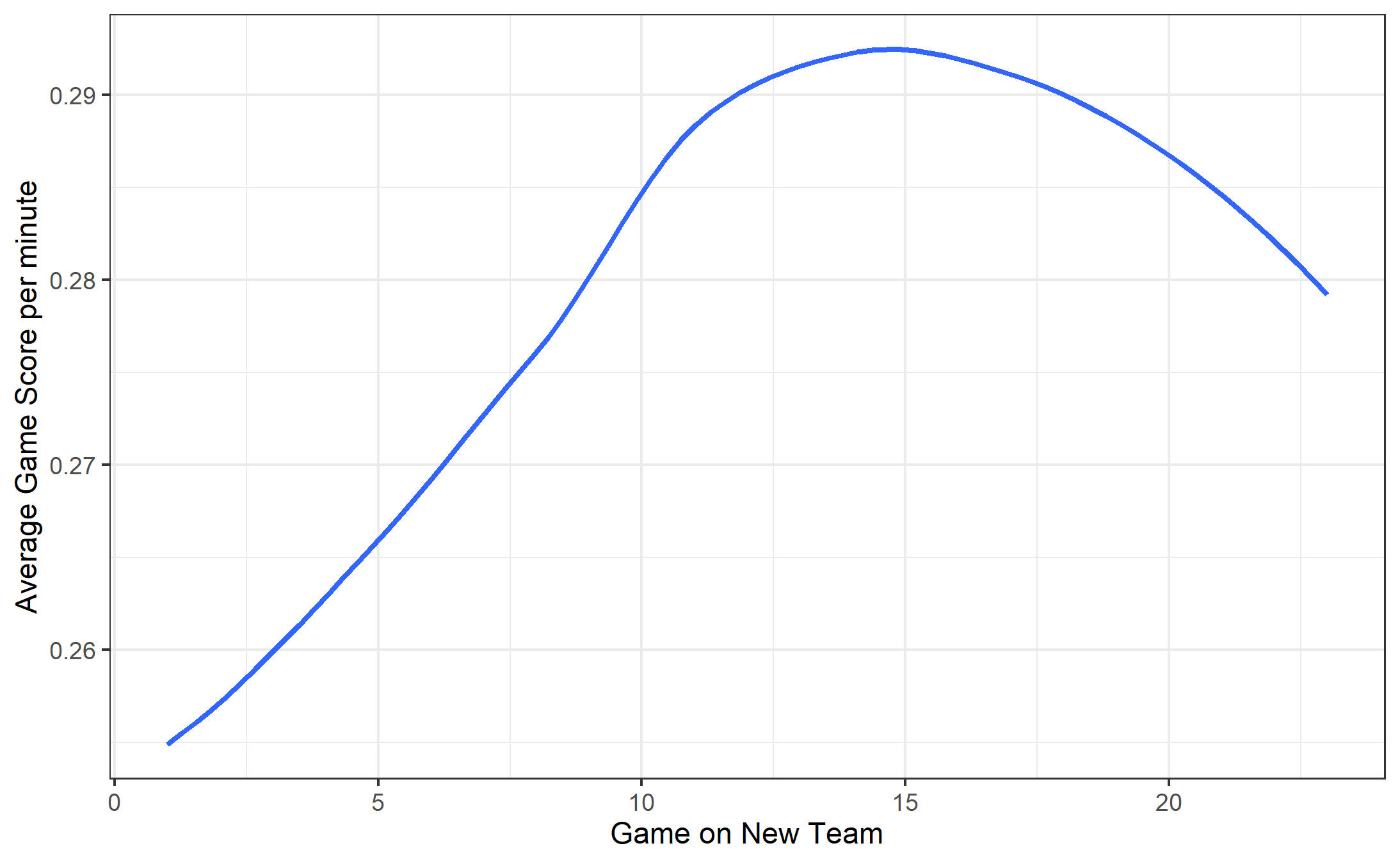 One potential reason for this decline in per-minute production is that, at around 15-17 games, coaches might feel more comfortable with the player’s abilities in the system, and therefore begin to play them against more difficult lineups. But teams might be making this transition before players have fully integrated into their system. If this is the case, teams might want to wait until around game 15 to introduce a player to their full minutes and start pitting them against better competition. This gives players more time (roughly two weeks) to learn the system both in and outside of games, better preparing them to face more talented opponents.

Next: Declining ratings and rethinking the NBA’s game-centric model